Another feather in the cap for AB de Villiers…

Another feather in the cap for AB de Villiers… 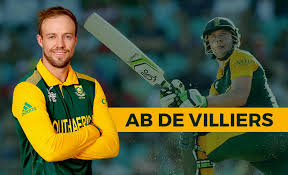 Former Proteas star batsman AB de Villiers has been awarded Honorary Life Membership at the Marylebone Cricket Club (MCC). The MCC, which owns Lord’s and acts as the guardian of the laws of the game, was founded in 1787. According to the Lord’s website, the club has bestowed this honour in recognition of De Villiers’ outstanding achievements in cricket.

The 35-year-old South African is currently in England playing for the county Middlesex in the T20 Blast. De Villiers made a blistering unbeaten 88 from 43 balls on his debut against Essex at Lord’s, and matched the innings at Richmond against Somerset, a knock which took only 35 deliveries. De Villiers, who announced his retirement from international cricket last year, played 114 Tests, 228 ODIs and 78 T20Is for the Proteas from 2004-2018. He was voted as the ICC ODI Cricketer of the Year in 2010, 2014 and 2015.