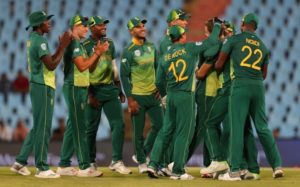 It has been a disastrous season for the Proteas, having lost 3 matches out of 3. South Africa have faced England, Bangladesh and India, and go up against West Indies in the next match on Monday 10th June.  Morris this morning appealed to fans to continue supporting the Proteas.

World Food Safety Day is celebrated on 7 June to draw global attention to the consequences of contaminated food and water to the health. Also, this day focuses on the way to reduce the risk of food poisoning. Safety of food is a key to achieve the Sustainable Development Goals

The latest on the Zondo Commission of Enquiry

Former Transnet group treasurer Mathane Makgatho claimed the company’s former CFO Anoj Singh ordered that she be blocked from accessing a data centre where tender bids were being processed for the controversial locomotives deal. Makgatho has been testifying at the state capture commission of inquiry today regarding the role of Transnet’s treasury unit during the issuing of the tender. Yesterday, financial risk management expert Dr Jonathan Bloom, who was hired to investigate irregularities at Transnet, told the commission that the company lost close to R1 billion during the procurement of the 1,064 locomotives.

School violence on the increase?

Forest High School in the south of Johannesburg opened today following the fatal stabbing of a pupil outside the school on Monday. 18 year old Daniel Bakwela was stabbed to death outside the school, allegedly by a fellow pupil. Gauteng police have since arrested a pupil who was on the run after he allegedly stabbed three fellow pupils, leaving one dead outside the school in Turffontein. Pupils have reported that the suspect was defending himself when being attacked by the three pupils. The other two pupils were injured in the alleged altercation.