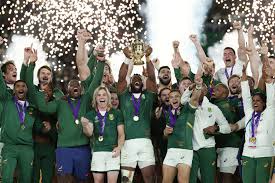 South Africa have won the 2019 Rugby World Cup after beating England in a bruising final in Yokohama . Handre Pollard delivered a kicking masterclass for Springboks, scoring six penalties and two conversions. England’s Owen Farrell was also impressive from the tee, scoring all of his side’s points with four penalties. South Africa struck a fatal blow to England when Makazole Mapimpi finished off a sensational attack with a try. Things went from bad to worse for Eddie Jones and his team when Cheslin Kolbe scored another late on